Featured in the January 2021 Issue of The Open Doors Review and included in the Series: letters from Lockdown. View Magazine Here.

Recently, I have been fascinated with the Mediterranean. The crisp beaches, the white sailboats, steep cliffs, drinks on the terrace, old beautiful cars, relaxed days, warm nights. Not America. Flower beds and cobble stones and crumbling buildings.

Those countries that have seen monarchies, war, border changes, name changes, power structure changes, currency changes. When the arc of your existence is so long, when your history has survived and persisted, maybe there’s less pressure on the big picture of your life, and the focus is instead on the small, the simple, the slow. With nothing, ultimately in your control, your mind is your escape, your front lawn, your art, a book, a walk around the block. Dinner is ritual, breakfast is revered, a bath is to be cherished.

Maybe these old cultures are appealing because they represent that ability to span hundreds of years, to have seen it all, and to come away from it all with an understanding of what really matters. Contemporary American culture of optimization and go-get-em going on all the time leaves no space for that realization. Except for now, weirdly.

As we enter second lockdown and there is nothing happening outside, there is a lot happening inside. It turns out that our universe is infinite and now instead of paying attention to what happens over there, or over THERE or across the street or down the block or by the place that one time, I am focused on the oranges sitting on the table. In the fruit stand. The cats sleeping on the couch, the sun in my room.

The contrast to my interior old-world bubble and the bi-product of our stupid, youthful country is the starkness of how our culture does not value people at all. Built on the genocide of its indigenous population and enslavement of another, the path was set. To ignore that foundation makes it impossible to build a culture that sees human life as valuable. American culture does not value self. It does not value labor or creative expression or human interaction. The person is a means to the profit.

If your livelihood or career is serving people, or working freelance or doing anything alone or in any way not corporate, everything is slashed right now. Working in a restaurant, working in a gallery, being a photographer, a dish washer, a server, all, these things are all wiped out. It feels harsh, and cruel. The government is not helping people, they are letting people die, they are making it into a reality TV show. Now more than ever, the world can see that America was meant for the educated, wealthy second sons of semi-nobility to craft a country for themselves, to experiment with their armchair philosophies, to declare their own liberties and to craft to their own language. To watch a country built on those things, in the modern world, is to watch a slice of humanity play puppeteer with the people who’s labor they have extracted their wealth from, with no care at all for the state-sanctioned indentured servitude upheld for their stock market.

This is a country that does not function for its citizens. It functions for the people who profit off the way the laws are created, which in turn, are only created to allow those profits to be made, or are written with the correct loopholes. That is it.

I can see now that anything that exists in our country that functions as any kind of good, as any kind of humanitarian freedom or right, is only allowed if it props up the narrative of America. The narrative of boot-straps and home-ownership dreams, but all it really does it remove regulations that might prevent corporations and billionaires to profit. If there is a logical, helpful, uplifting policy that is proposed, but threatens the rich, it is fought. If the people in charge all believe the myth so deeply, and see the ways they benefit from it, why would they ever undo it? Why would they believe the people who are crushed by it?

The myth of course is that America is the improvement of all the old cultures. We all came here to be free! to be a democracy! It’s a fairytale that was never real. Never in the history of our country has every person been treated as free, as valuable or even with the decency that human life deserves inherent rights. What freedom is this? The freedom of the unlanded gentry to leave England, leave the taxes of the king, to come and be kings themselves? The rest of us, we are cogs in that system of corporate kingship. And today, the house is on fire, and they stand outside debating which system to put the fire out will maintain their rule.

And so I am trying to take a page from the ancient places. The places that have seen it all. Maybe we aren’t doomed as a country, maybe I can have faith when I think that the last 244 years are just the beginning. And the mythicizing heartlessness isn’t final—our arc is longer than that. Seeing the small and the beautiful, cherishing someone simply for existing, valuing the long dinner, the slow walk, maybe we can all learn who we are away from the crushing corporate America, and fight for those things.

Author Bio: Norah grew up in the San Francisco Bay Area—and first met the Mediterranean when she was 16 on an exchange trip. She is a running enthusiast, lover of architecture, art and taking long walks around San Francisco where she lives with her husband Adam and two cats. 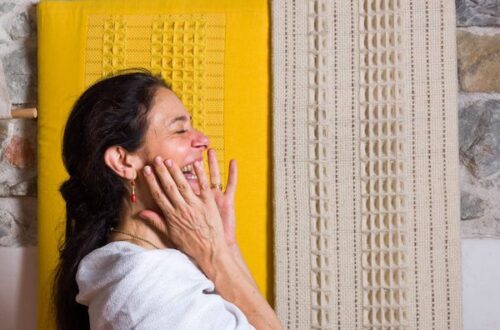